The team National Service Scheme ensures a tuned professonional endowed with considerable success and armed them up humans with humanity. Being a prominent part of the legal fraternity the GLC NSS helps each and every volunteer to grow into the fullness of life thus becoming perfect motivators to millons of youth and role models for lethal struggle for justice. The NSS office is housed beneath the Main block.

The National Service Scheme Unit of Government Law College, Thiruvananthapuram in order to commemorate the 70 th Constitution and Law Day 2019 and in order to raise legal literacy organised the 4th All India Legal Quiz Competition Boudhika 2019 on 26 th November 2019. The competition is organised to improve on one’s knowledge of law, especially the finer points that may often get inadequate attention, in a fun manner. The event benefits in increasing legal awareness among law students across the country and the ones in Government Law College, Thiruvananthapuram. The latter has the added benefit of networking and organisational opportunities.

The Government Law College, Thiruvananthapuram celebrated the World Environment Day on 5th June 2019. The theme selected by UNEP for the year 2019 was "air pollution". The programme was inaugurated by the college principal Dr. R. Biju Kumar by planting one sapling. The students and volunteers of NSS planted around 40 saplings on the day. 50 saplings were distributed to the students. A cleaning work was initiated in the college premises by the NSS forum in the college premises and portions of land were divided and given to students for cleaning and to use that part as their own garden. Plastic wastes were removed and it was handed over to Thiruvananthapuram Corporation

As part of the international yoga day observed on June 21st, the NSS unit of our college conducted yoga day celebrations. The programme was organised at Museum Hall, Palayam, Trivandrum. 20 NSS volunteers took part in the programme. The yoga master began the class by mentioning about the importance of practicing yoga which helps in the physical, spiritual and mental growth of an individual.After the basic warmups, various yogasanas were taught and practised. The basic yoga postures like Vrikshasana, Trikonasa, Vajrasana and Padmasana were practiced. The basics of pranayama were also taught. The class ended up with a meditation session.

Kargil Vijay Diwas is named after the successful Operation Vijay, which is celebrated in India on 26th July. On this date in 1999, Indian successfully took command of the high outposts which had been lost to Pakistan. In order to commemorate the 20th anniversary of this Operation, Kerala University had organised a programme at Senate Hall, of which 25 volunteers from the college participated.

The disaster began from the heavy rains and flooding in northern Kerala. There was a need to support and rescue people residing there. Since we had a previous experience of organising relief campaign last year, we had immediately called for a door-to-door campaign and had started a collection point in the college premises. Some of the volunteers were send to various relief camps and they enquired about the problems and needs of the refugees and they made a list of the requirements.  As soon as the rescue operations began, there was a dire need of food materials, clothes and medicines, so the NSS unit of Govt. Law College, Thiruvananthapuram organized an immediate material collection programme. Around 60 volunteers were grouped and send to different parts of the city as part of the campaign. They collected food materials, clothes, sanitary napkins, blankets and utensils. We pooled Rs. 20000 from faculties, students and from the public. Medicines, cleaning materials, detergents and ready to cook food were purchased for the amount and were handed over to the Corporation Office, Thiruvananthapuram.

We the NSS volunteers of GLC, Thiruvananthapuram joined our hands with million others in rescue works held in Trivandrum. Our students volunteered in the sorting process of materials that reached the District Panchayat Office from various parts of the district and packed them well making the process of delivering the needful materials to a locality in particular easier. The NSS, GLCT team helped the rescue force in loading and unloading of relief materials to various trucks. The NSS volunteers were later honoured in a ceremony organised by District Panchayat in Central Stadium on 7th September 2019which was inaugurated by honourable Chief Minister of the state Sri. PinarayiVijayan. 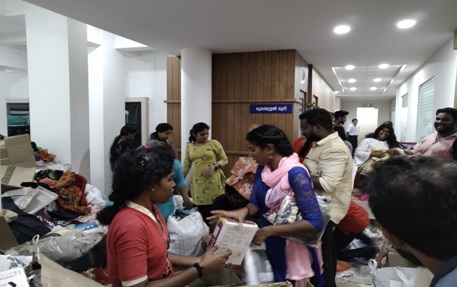 On this day the nation pays homage to the former Prime Minister Rajiv Gandhi. This day is observed to encourage the national integration, peace, affection, and communal harmony among the Indian people of all religions. ‘Sadbhavana’ in English language means goodwill and bonafide. There was an oath taking ceremony and the oath was administered to the volunteers by the Principal Dr. R Biju Kumar in which 50 volunteers participated.

Swachh Bharat Abhayan is a nation-wide campaign that aims to clean up the streets, roads and infrastructure of India’s cities, towns, urban and rural areas. It is India’s largest cleanliness drive to date with three million government employees and students from all parts of Indian participating in 4043 cities, towns and rural areas. As part of this programme, NSS GLCT unit organised a rally to spread awareness among the people in the city limits regarding the need to keep our locality clean. A cleaning drive was organised in the campus premises in which 100 volunteers participated.

Mahatma Gandhi once said, “There are people in the world so hungry, that God cannot appear to them except in the form of bread”. In order to satiate the hunger of the innumerable patients and their relatives who take treatment in the General hospital, the NSS volunteers of Govt. Law College, Trivandrum initiated a food donation program. The programme was instituted in collaboration with 50 year celebration of NSS.

National Service Scheme, under the Ministry of Youth Affairs & Sports Govt. of India, popularly known as NSS was launched on 24th September, 1969, the birth centenary year of the Father of the Nation. Therefore, 24 September is celebrated every year as NSS Day. NSS aims at arousing social consciousness of the youth with an overall objective of personality development through community service with a motto "Not Me, But You."

Government Law College, Thiruvananthapuram, celebrated the NSS Day on 24 September 2019, with great enthusiasm by organizing a function, which was presided over by Principal of the college, Dr. Biju Kumar. The function commenced with the recitation of the NSS Anthem," ManasuNannavatte..." by the NSS Volunteers. Thereafter, former NSS Programme Officer, Associate Prof. Dr. Suhruth Kumar highlighted the role of NSS in nation building. He highlighted the relevance and significance of NSS in the modern scenario. He provided a fruitful orientation session for the newly admitted students and NSS volunteers of the college and the programme was attended by 100 volunteers of the NSS unit.